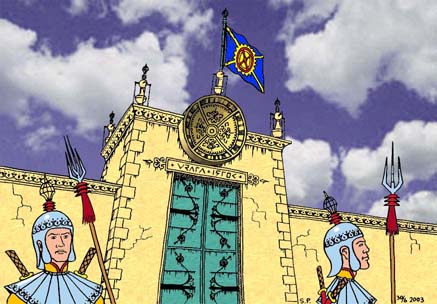 Portelan - The holy capital city of Matebia.
This is the east gate as it looked in the 13:th century and it is strictly guarded. Beggars and other ordinary people is forbidden to enter the city, it is only citizens with special passports and important deliveries to the palaces who has access to the city. But once a year, in the People's Day, the fifth day in the Fourth month, is everyone who had enough money to buy sacrificial food of the monirs - the sun priests who without exception is eunucks - at the gates, welcome inside. This food consist of pies, pastries, fruit and other exquisite delicacies, and is given by the Matebian people to the Tranibor (look below), who under the holy Vernal Equinox week reside in the Temple of the Sun in the Sun Square (which in reality is not square, but circular) in the nexus of the circular capital city. If the Tranibor ate the sacrificed food, the giver is blessed with happiness and prosperity in a whole year.
The gate on the picture above is one of four identical gates which lies in each cardinal point: east, west, north and south. Number four is the holy number: four quadrants, four seasons, four cardinal points, four elements (water, earth, wind, fire) and so on. Even the rivets on the holy Sun Disk (the dish on the Time Machine!) is grouped in four (and the Time Machine has four legs, four rosettes on the railings and four blinking lamps, three on the panel and a fourth on the rear brass shaft!).

A tranishek - a Matebian warlord.
In this world, there are tranisheks and they are very much like a the ancient japanese Shogun and below them there are warriors, narods, like the samurais. The name tranishek means "the right hand of the sun" and the name narod means "brother of arms". The tranishek and his narods are excellent in martial arts similar to Karate, Kung Fu and Wu Shu. The tranishek on this picture is bearing his parade uniform with a much wider golden sun disk on the helmet and on the chest is he having the emblem of one of the ten khobirs. A khobir is a provincial lord directly subordinated to the Tranibor himself and the name khobir means "principal supervisor". The principal weapon of the Matebian warriors is the sabre, much similar to the Japanese sword and they always bears two of them on the back (yes, they are trained to fight ambidextriously, with both hands). A Matebian warrior is trained from his sixth year to his twentieth and he is always practising. He get the same amount of good food as the family members in the khobir clan, but he never grows fat due to the continual training. If he lives long enough, he can be as old as seventy-eighty years and still be dangerous to any enemy - even dangerouslier, because an enemy vill underestimate him due to his age.
The women are not free as in ancient China or Egypt, they are wearing burqa as in the Taliban culture of Afghanistan. This is a strictly patriarchal world as in ancient Japan - the Nameless Prophet was a man and also the Tranibor. 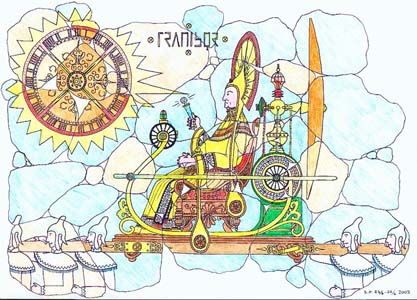 His Divine Highness the Tranibor, Son of the Sun, emperor of Matebia, here carried by 16 servants (he and his Time Machine is a heavy load!) trough Portelan in the Vernal Procession.
Before him is the Holy Sun Disk which has identical ornaments as the dish and also his imperial vestment has ornaments from the Time Machine and is somewhat a crossing between ancient Egyptian, Phrygian, Tibetan, Chinese and Japanese style. Remember that the yellow color was sacred in ancient China and allowed to be beared only by the emperor himself and in the ancient Egypt there was the pharao Echnaten who worshipped the sun disk Aten. The Tranibor himself is a mix of the emperor of the ancient China, the pharao and the Pope.
According to the Matebian Holy Legend the Tranibor is the Son of the Sun-God himself. His name is so sacred that it was not to be pronounced and the only ones who knew it was the nad-monir (high priest), the ten khobirs (provincial lords) and the ten tranisheks (warlords). The arch-enemies of the Matebians, the Erkelzaarians, claims that there is only one god, the God of light, who for the Matebians is the same as the Sun-God himself, but the Erkelzaarians claims that the Sun-God is a false and pagan god.

The Tranibor, left as a ten year old prince, right as a mature man in a flying Time Machine.
The Tranibor arrived in Matebia in the beginning of the Matebian Chronology and he was sitting in the lap of the Nameless Prophet (I will not reveal his name, it will spoil my fantasy novel - but i can say: the prophet has no beard and this is why all Matebians are shaved). Two hundred years later the Tranibor's voice broke and in the beginning of the 14:th century he looked like a man in his thirties. He was then 193 cm (6,33 feet) tall and almost 200 kg (440 pounds) heavy. That depends on the fact that he never leaves the Time Machine and he is eating a lot of sacrificed sweet and fat delicious food (remember he is sitting in a Time Machine - one week a year for the Matebians means always for him). Why he hasn't grew any fatter depends on that the scepter (the lever with the Tibetan rock crystal) in his hand make him invulnerable to wounds, illnesses - and further obesity. Being fat is not disgusting, on the contrary, being fat is a privilege and pride, because only the rich and powerful people has enough food.
According to the Matebian Holy Legend, the golden-yellow liquid is holy nectar from the Tranibor which is a medicine for the ill and wounded, and many miraculous recoverings are documented in the "Healing Codex". The Erkelzaarians claims that the liquid is urine, and this tasteless and awful sacrilege had caused many bitter wars between Matebia and Erkelzaar. (A Son of the Sun-God does not urinate like ordinary people, but the Erkelzaarians claims that a god can't have any sons - and certainly not the God of Light - and therefore must the Tranibor be an ordinary human being like the king of Erkelzaar.) The picture on the right side above is Erkelzaarian, the Matebians would never draw an ugly "exhaust pipe" in the rear of the Holy Throne and the Matebians would never draw His Divine Highness the Tranibor as a voluptuous tyrant. (The Tranibor always fills golden bottles with his life-giving nectar and he never laughs nor weeps aloud.)


Back to What If