Here is something for you: The CD Time Machine by the band NewTown! And it is also the very first CD with one of my drawings on the cover! The CD is brand new, it was released in November 5, 2013, and on its cover is the classic Time Machine from George Pals classic 1960 movie.

And my drawing is nicely and awesomely used on the CD cover. The copyright of the drawing is still mine; the rights are only for this particular CD cover - in return I got three nicely signed CD:s (the signatures of the band members are on the backside), because I do not sell my art, I only do swaps - if the company is small and relatively unknown. 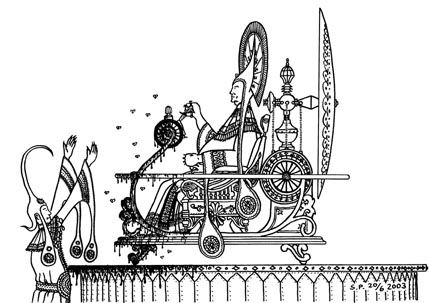 I made the drawing ten years ago depicting the Tranibor (the Sun Emperor of Matebia) in his Time Machine throne, but for my forthcoming sequel to my fantasy trilogy "The Tiaras of Power", I needed a Time Machine illustration without the Tranibor and I simply deleted him from the machine. And I am very proud that the publishing coordinator Greg Bentley who also made the layout of this CD, found and liked my Time Machine site on the Net, and then used one of my drawings on a disc with merry and down-to-earth melodies that touches on every listening.

It vas a pure coincidence: Greg first wanted to use this image, the original blueprint once published by Starlog Magazine, but I can't swap images which isn't mine. Then I added the same type of blue background to my own drawing and offered it instead of the blueprint, and it became, as you can see above, even better... Thanks Greg!

Here is a link to the bluegrass band: http://thenewtownband.com/

Pisgah Ridge Records is a division of Crossroads Entertainment & Marketing Inc., where you can buy this CD: http://crossroadsmusic.com/newtown/time-machine/